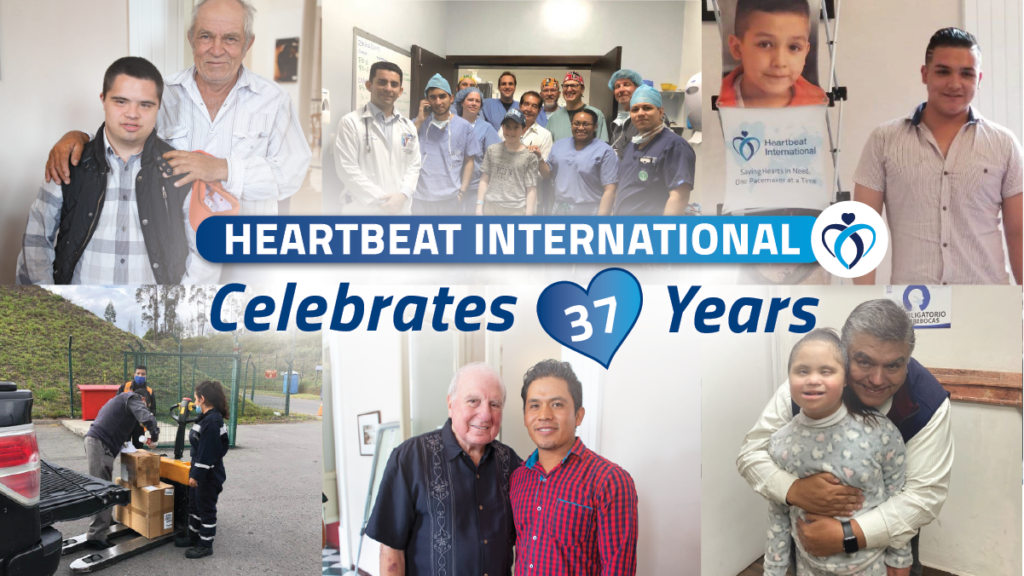 It is hard to believe but it was 37 years ago today, October 18th, 1984, that Dr. Henry D. McIntosh formally launched ForHearts Worldwide. And 37 years later, there is so much to celebrate. So much kindness and generosity. So many lives saved. And like so many organizations that have changed the world, it all started as a simple idea, a simple act of kindness.

It began with a young cardiology resident from Baylor University, Dr. Frederico Alfaro, treating a 17-year-old boy with a serious heart block in the country of Guatemala. The boy’s condition was easily treatable, but his family could not afford the surgery. Tragically, the boy died.

Deeply troubled by the boy’s death, Dr. Alfaro reached out to the former Chairman of Medicine at Baylor University, Dr. Henry D. McIntosh, to discuss how this kind of meaningless death could be avoided in the future. Acting quickly, Dr. McIntosh came up with idea of “gifting” used pacemakers and the vision for ForHearts Worldwide was born. Two years later while working at The Watson Clinic in Lakeland, Florida, Dr. McIntosh formally launched ForHearts Worldwide

Since then, more than 16,000 thousand lives have been saved in more than 20 countries with pacemakers paid for by generous donors and corporations and implanted by caring doctors and technicians donating their skill and time. That’s 16,000 promising futures that would have been cut short. 16,000 families spared the sorrow of losing a loved one. 16,000 souls allowed to fulfill the potential of their lives because Heartbeat International Foundation exists.

This month we also celebrate another important milestone in ForHearts’ rich history as longtime Chairman and leader of ForHearts Woldwide, Tampa cardiologist Dr. Benedict S. Maniscalco, prepares to pass the baton. The legacy Dr. Maniscalco leaves behind is truly beyond measure as he has given his heart and soul to this organization for the past 18 years.

Since taking the reins in 2003, Dr. Maniscalco has completely restructured the organization to provide a rock-solid foundation. He has established new partnerships to expand our reach and save more lives. He has expanded the number of heart centers across the globe. He has dramatically increased the number of pacemaker implants performed and helped save thousands and thousands of lives. For his efforts and years of dedication, Dr. Maniscalco was recently honored by the Heart Rhythm Society with its first ever Global Humanitarian Award.

“I have grandchildren and I would move heaven and earth to save one of their lives,” says Dr. Maniscalco. “The idea that someone’s child would die today because their family can’t afford a pacemaker is unacceptable.”

Most importantly, Dr. Maniscalco will leave behind ForHearts that is far stronger and more vibrant than the one he inherited. “Through the many changes in medicine and philanthropy over the last 18 years, my most important goal has been to make sure ForHearts Worldwide has a strong foundation that will allow it to continue to grow and save lives for decades to come,” says Dr. Maniscalco. “I still strongly believe that, with the proper funding, we can become the strongest force for cardiovascular disease in third world countries that the globe has ever seen.”

To that end, Dr. Maniscalco has led a substantial rebranding of ForHearts Worldwide to be launched early next year. “To remain viable in the growing clutter and competition of the digital world, we need a brand and identity that stands out and owns its space. Our new name, domain, website and logo will allow us to increase fundraising and establish a much stronger ranking and identity online.” Stay tuned for exciting news of our rebranding launch in the next few months.

So nearly four decades after that teenage boy died unnecessarily in Guatemala, his death continues to inspire a movement that saves others every day. “We owe it to that young man and, all the others who never should have died, to keep working and fundraising and keep Heartbeat International Foundation strong and alive,” says Dr. Maniscalco. “Never underestimate how powerful one act of kindness can be, and how it can change the world.”